So I have decided to focus my PhD on designing digital health interventions to support men when preparing for conception. A health related post will come in the future that will detail preconception care. (I hope)

My first “quick” study was looking at what digital interventions already exists to support the population of couples who are preparing to conceive. Therefore, I did an analysis of existing smartphone apps that focus on the period before conception.

I found a lot of apps that concentrate on tracking ovulation, fertility and periods, so when to have intercourse to conceive. A lot of apps also focused on during pregnancy and tracking the baby through time. There was a gap of the time before conception and preparing both men and women with their health and well-being.

I did an app review to find apps for this specific purpose. I found that actually in the many (many!) apps only 28 were developed for this particular population, and 3 of those didn’t even work. 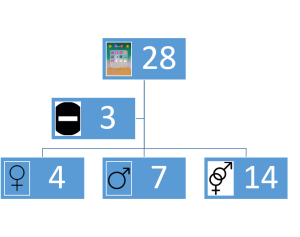 I wrote this up as a paper and submitted it to the ACM MobileHCI 2018 conference. I got accepted and my paper was published in the proceedings. Full text can be found here and here. Here is a quick extract of the published extract. 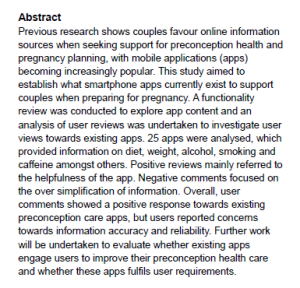 Existing apps were reviewed. The topics and information they provided were tagged and put into a nice neat table, well I thought so anyway. We found that there was little focus on emotional well-being when preparing for conception.

We then did an analysis of user reviews that were left by users of these existing apps. We looked at the usefulness, usability and the satisfaction of the apps.

In summary, I found that a few apps do exist and the users that use them seem to be satisfied, yet we have no idea whether they are truly successful in improving couples preconception health.