The Delhi gang rape, yet again another horrendous attack has caused the world to respond in outrage. On 16th December, a young 23 year old woman and her male companion were on their way home from watching a movie. They travelled by bus and were approached by 6 men who started to quiz the lady on why she was travelling late at night with a man that was not her husband.

They then proceeded to attack her and her partner. The media reports that they both fought well but against 6, they were unsuccessful. The male was beaten and the girl, (whose name is not being released, but is being called many names one being Damini) was then in turn raped by each of the 6 men. As if this was not horrific enough, they then proceeded to sexually abuse her using an iron rod as a weapon. This was so brutal that Damini sustained significant internal injuries.

This attack was reported to take place for over an hour. They were then thrown from the moving vehicle onto the street, barely clothed. Sadly she passed away in hospital from severe internal injuries, infection and organ failure.

I have limited the details I have included into my above description, because even I myself cannot comprehend the ordeal.

There are so many things that are unjust, debauched and simply wrong in this event. I wish we could say this was a one off random attack. However, the occurrences of rape are far too common. Especially in the city of Delhi, which has now been coined as “Rape Capital”. In 2010 414 rape cases were reported, in 2012 over 600 have been reported. Let’s also consider that approximately only 1 in 3 rapes are actually reported. 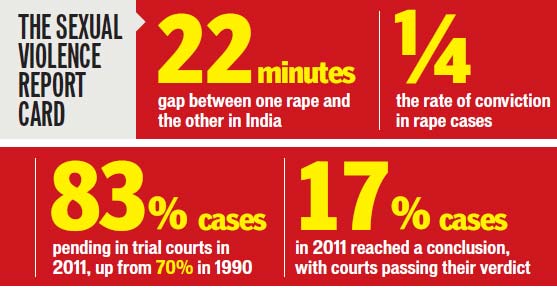 Do we really live in a world where non-consensual sex is a regular occurrence? You can speak to women and girls that have been in or lived in the country and many will be able to share personal accounts of physical or verbal abuse. You just need to read an article by Aakriti Kaushik, who wrote, “It’s okay if he does it. You are a girl.” It starts with the constant staring of every female that walks past, this is normalised. This is step one, that escalates to jeering, to taunting and then on to physical abuse.

Reports and charges are rarely filed for fear of shame or embarrassment. The victims feel the shame and suffer the stigma and the perpetrators are left to continue their lives and on to the next. We need to focus on changing this cultural norm and the gender roles. In a culture where respect for one’s mother is of the utmost importance, how can we mistreat the women so? The violated woman is someone’s daughter, sister or mother. We respect ourselves for having the respect for others yet, this trust and faith is destroyed with the act of abuse. 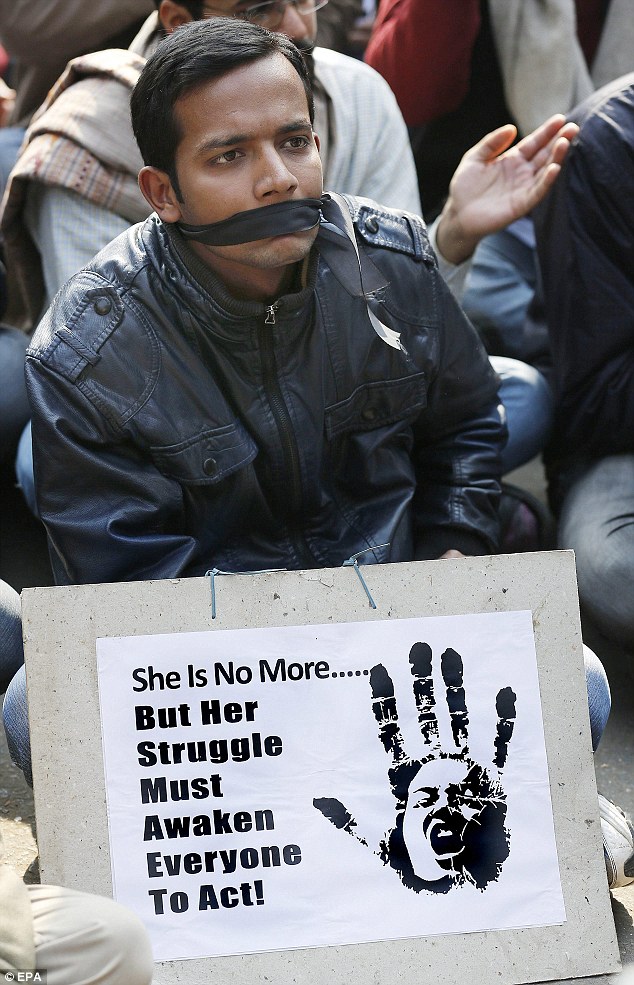 This is a country where from birth girls are underprivileged; there are still cases of sex selected abortions, skewing the sex ratios. She is less likely to achieve high levels of education in relation to her male counterparts. She is more likely to get married at a younger age, bear children at a young age and finally be disrespected.

This story has opened the eyes of the world that we cannot remain silent and allow for these monstrosities to continue. This event has led to an increase in awareness to rape. It was atrocious what happened to Damini, but we must not forget that she is one of many. Her story is one in a saga. 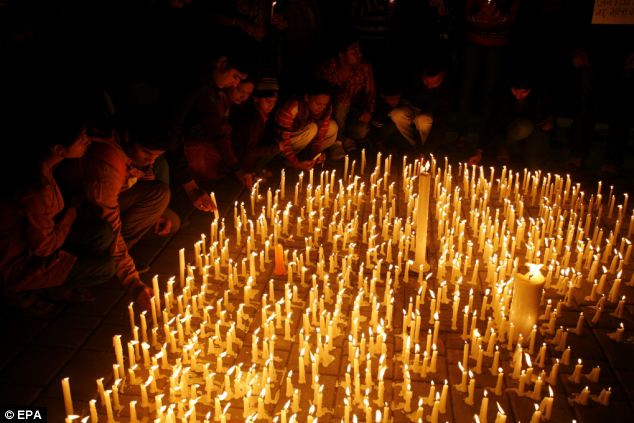 There have been many protests in Damini’s name with the common goal, to evoke justice for her suffering, for her life. In partnership together with Big Hug Foundation and CAREducation Trust UK we have organised a candlelight vigil to take place on Saturday 5th January 2012, see details. This is to pay tribute and to give a voice to all victims of rape. To look to the future on how we create a voice to show our support for the injustice of women in India, raising awareness of the problems they face on a daily basis, and inspiring change. 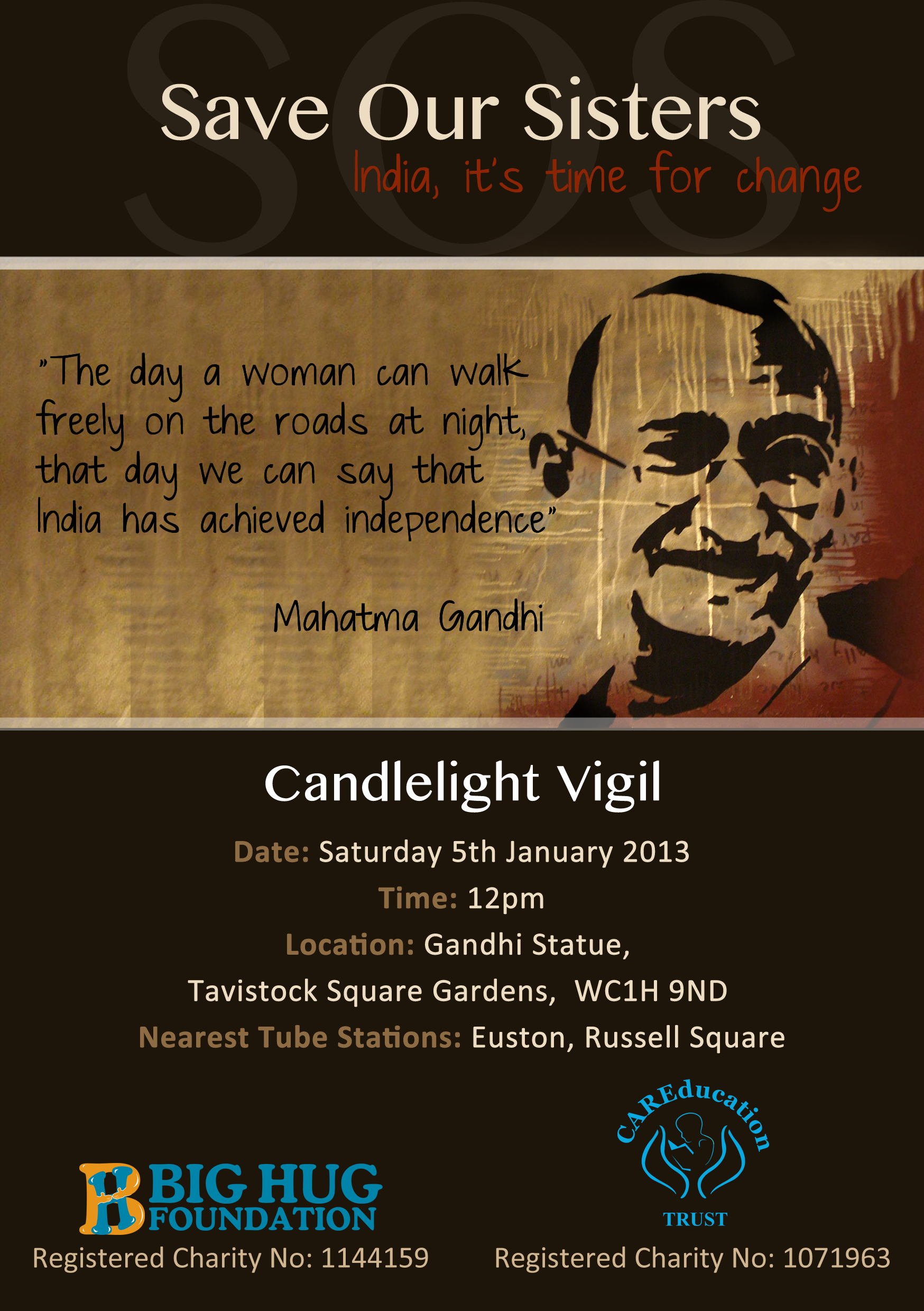 In the past, women have been blamed for provoking attention, and unnecessarily teasing, through clothes she wears and body language. Or by simply not being as careful as she could be, by being out late at night or taking quiet deserted routes alone. How can we justify that these are the provocations of rape? Should we not live in a world where it is accepted to walk the streets without fear of attack? Together we should look to increase the levels of education and moral values, so that a potential rapist will never take that action and rape another person. Our youth are our future; we have a social, moral and ethical responsibility to ensure the future of mankind does not accept the action of rape and attack as acceptable actions.

Don’t teach me how not to get raped, teach not to rape. 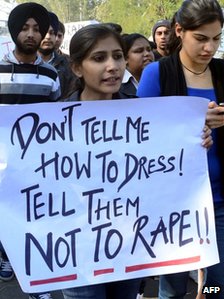 Gandhiji once said, “The day a woman can walk freely on the roads at night, that day we can say India has achieved Independence.”

Finally a tribute to Damini, by Amitabh Bachchan

“With the passage of time, the candles shall burn out and lose their flame…The flowers offered with devotion, shall in the absence of water, get dry and weathered out… The voices of protest both vocal and silent shall lose their strength… But the ‘fearless’ fire that has been ignited, shall rekindle the flames in our hearts… The waterless dry and weathered flowers shall be brought to life drenched by the tears in our eyes…With a burning throat the soul of ‘Damini’ and ‘Amaanat’, shall be voiced in the entire universe… That I am the Mother, sister and daughter of my Bharat… Respect and dignity are my birth right possessions. Bharat the country is my Mother…

Forget about me, become at least the recognised worthy face of your Mother..!”