MDG 3 is a comprehensive target to achieve. How would we attempt to measure or quantify gender equality and the empowerment of women? This is why along with the main outline of the target to achieve; there are indicators that are used as proxies for this.

These are as follows:

The main target states that we need to eliminate gender disparity in primary and secondary education. There have been many improvements thus far in MDG 3. As reported by DFID, in 2006 there were 95 girls for every 100 boys enrolled into primary education, an increase on previous years. However I believe we also need to look into completion rates as well as enrolment. In other areas we have seen an increase in women’s involvement, such as in politics. There has been an increase in the number of national seats held by women.

“Knowledge is the light, education is the wick”

What I have found and what we all need to embrace is that education is the beginning; it is the chance, the opportunity and opens the doors for so many events. For example, if a woman is highly educated, she is more likely to progress in her career, this could increase her age of marriage and reduce her parity. An educated woman is then more likely to ensure her children are educated and have those opportunities. In developing settings, an educated woman is more likely to have decision making power in all aspects. We already know the power and the empowerment that can come from the simple decision making power of whether to or able to use contraception or not. The health benefits are endless, and all because that little girl was able to complete her education.

How far have we to go?

The latest statistics as shown in the diagram below show the progress towards the goal. 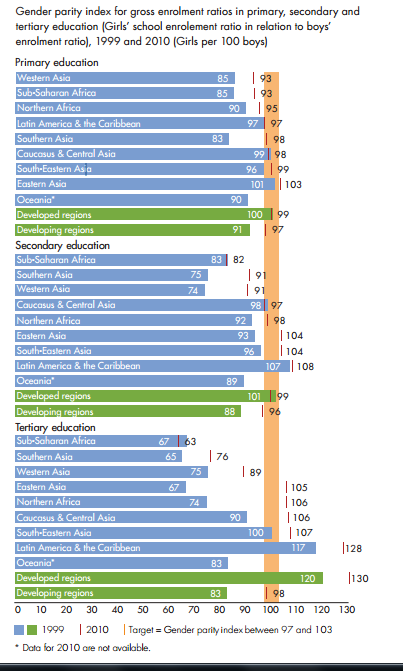 I will keep reiterating this point, the importance of the inclusion of all. We may be placing importance females but males must be involved in all decisions, and attitude change programmes. It is not sustainable without this.

Previous blogs have shared my involvement in a UK based charity that works towards achieving this goal, CAREducation Trust. They in their own time, with their own resources work to reduce the inequalities and ensure children have the opportunity to progress. It is that easy to help. We now have just over 3 years till 2015 when we are meant to have achieved these MDGs targets.

Be a voice, be the helping hand that gives that little girl a chance of a brighter future.